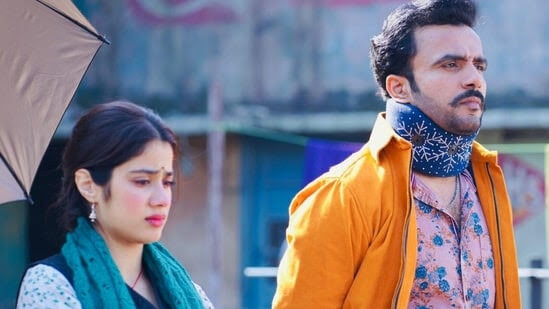 Janhvi Kapoor-starrer Good Luck Jerry promises nothing less than good and easy entertainment with its intriguing plot. While Janhvi proved everyone who thought her a talentless star kid wrong, actor Jaswant Singh Dalal has also won hearts. He was seen as Timmy, aka the leader of the drug peddlers in the Siddharth Sen Gupta directorial. (Also read: Hrithik Roshan is fan of Deepak Dobriyal’s performance in Good Luck Jerry: ‘What an amazing actor’ )

In an interview with Hindustan Times, Jaswant shared how the audience felt that his character deserved a better ending. Being able to start a conversation with his role, he said, “There are so many people who are compared to great actors. I have never gotten this much attention from women. They have found Timmy charming. I’m getting a lot of calls from directors now, Mukesh Chhabra called me the finest actor, can you imagine?”

Hrithik Roshan, among others, gave a shout out to the entire cast of Good Luck Jerry. Reacting to it, Jaswant said, “Greek God himself praised the film. What can be a bigger surprise than this!” While he was confident about the script, he had no idea the film would create such a deep impact. “I think post-pandemic the audience needs a light comedy.”

Jaswant shared great chemistry with Janhvi in the film. So how is their equation in reality? “She is a fantastic person. She is very humble and down-to-earth. She is such an honest actor who knows where she wants to head with her craft. There’s nothing fake about her. Janhvi always wants to learn. First I wasn’t sure if we would share a comfort zone, because she is a star kid. But, we broke the ice during our readings. She is so sweet that you cannot hold a grudge against her, you will end up smiling.”

Jaswant explained how his character is different from a stereotypical mafia. Timmy comes with a lot of respect for women. Inspired by the cartoon Tom and Jerry, his character is seen mostly injured when it comes to all things related to the heart. “He might be a goon but with heart.”

After the success of Good Lucky Jerry, Jaswant is now looking forward to Raj & DK’s upcoming Farzi, which will star Shahid Kapoor, Vijay Sethupathi and Raashii Khanna. As he awaits the big series, he said, “I am a big fan of Vijay Sethupathi. Because of Mukesh Chhabra I got this opportunity. I was filming with Vijay sir for a minimum of 30 days, he is the best human I have ever met. He is a sweetheart, who gives attention and love to everyone on set. He won’t let you feel like he is the superstar that he is. I have realised the importance of being grounded by him.” While working with Vijay was a dream come true, Jaswant hopes to collaborate with Vishal Bhardwaj in future.